Water with a high mineral content is called hard water; that with a low mineral content is called soft water. The level of water hardness is defined by the content of Ca+2、Mg+2 (alkaline-earth metals) expressed as CaO or CaCO3. This is known as the “total hardness”, and, in accordance with the commentary of the National Tax Agency’s Designated Method of Analysis, can be graded by degrees of hardness (measured on the German hardness scale) in line with the table below. 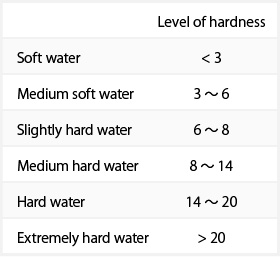 When calcium, magnesium and such are contained in water in the form of bicarbonates, boiling the water allows the minerals to be removed as insoluble carbonates. This is known as temporary hardness. Sulphates, chlorides, nitrates, phosphates and silicates cannot be removed by boiling, and water containing them is said to be permanently hard.