The grain remaining after threshing is called brown rice (genmai), and the white grain created by milling away the brown outer portion is simply called white rice (hakumai). In Japanese, the word 米 (kome; simply, “rice”), is generally taken to refer to white rice.

Figure Two shows a further section. The outermost layer is the one-cell thick epicarp, with six or seven layers of parenchyma cells below.

The tegmen (seed coat) develops from the integument of the ovules within the ovary, and the endosperm has an aleurone layer on the outside and parenchyma cells with starch storage ability below. The embryo (germ) is found at the base of the grain on the ventral side, and its germination is the source of the rice ear’s physical growth.

When the brown rice is polished, the bran and the germ are removed to give white rice. In the case of eating rice, the husk and the germ are removed, and about 7-10% of the weight is removed as bran. In the case of white rice for brewing, not only the bran, but the germ and the outer part (which is heavy in protein and fats) are removed. About 25-60% percent of the total weight (40-60% for ginjo-shu) is removed as nuka (rice powder), so the grains are much smaller and whiter than for table rice. 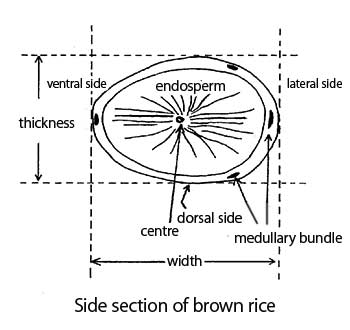 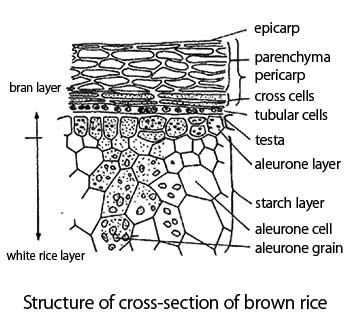 Figure Two.Structure of the cross-section of brown rice