After pressing and until heat-treating (hi-ire) , the unpasteurized sake is called nama (indicating live or raw). Until pasteurization, the new sake has a characteristic freshness of taste and aroma. Also, the various enzymes remain in an active state in nama-zake, and, although the greater part of yeast and other micro-organisms are removed during the pressing process, a certain quantity remains. For these reasons, unpasteurized sake is very prone to change during storage.

Conventional sake is pasteurized twice, once before storage, and once before bottling. Under Japanese law, sake “which is entirely unpasteurized” may be labeled as nama. Nama-zake may be sold in a cloudy state after pressing as shiboritate (“freshly pressed”), or may be clear and bright after filtration through active carbon. However, in such cases, as the products have not undergone sterilization and contain active enzymes and micro-organisms, changes in their make-up during distribution and hi-ochi spoilage can be problems. Sake which has undergone ultrafiltration to remove enzymes and micro-organisms to solve these problems still falls into the nama category. 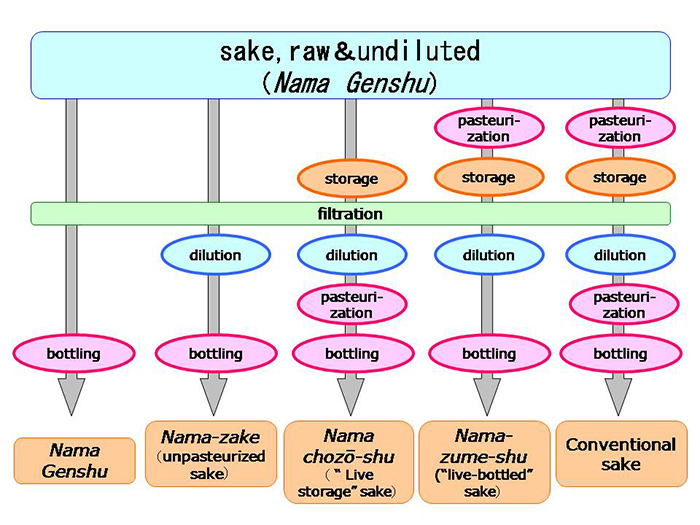