The mixing of the raw materials (water and rice) for seishu in tanks or other vessels is called shikomi (mashing).

If large quantities of raw materials were added to shubo simultaneously, the yeast, acid and other components would be greatly diluted. As a consequence, yeast growth would not be able to keep up, and there would be danger from the growth of contaminants. For this reason, the method of mashing in several stages, over a number of days while the yeast grows, is used.

Dan-kake is the term for mashing in stages, and the system of mashing in three stages is standard, and is known as sandan jikomi. This sees the three stages of soe (添), naka (仲) and tome (留) on successive days, with a rest day (odori) after the soe stage, meaning that the three steps usually take place over four days. Soe is mashed using materials equivalent to roughly twice the amount of the yeast starter, then the naka doubles the volume again, and tome once more. This system of doubling the volume at each stage is standard. Soe, naka and tome are abbreviations of the full names “hatsu-zoe (“first soe”, 初添 ), naka-zoe (“middle soe”, 仲添 ) and tome-zoe (“final soe”, 留添 ) . 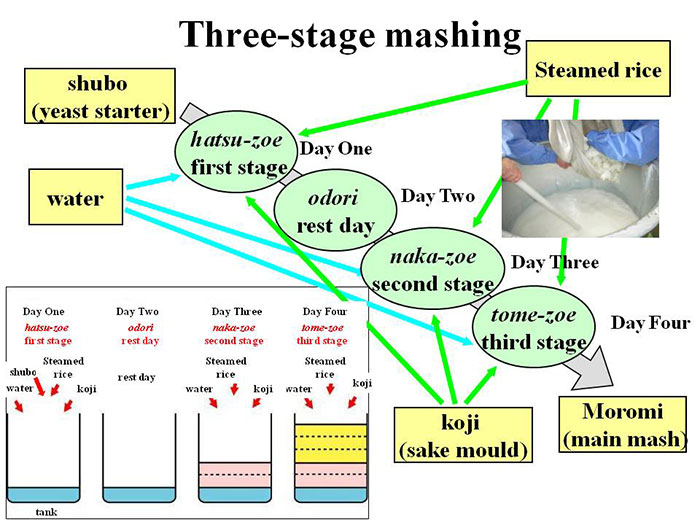