【English】
Tanba Brewers’ Guild, or a Master Brewer (or Brewers) of the Tanba guild

Along with Nanbu Toji from Iwate Prefecture and Echigo Toji (from Niigata), the Tanba guild is considered to be one of the Three Great Brewer’s Guilds of Japan. The origin of the guild is said to date from the 1775 employment of a brewing craftsman from Sasayama City in Hyogo Prefecture as the toji of a sake brewery in Ikeda in Osaka Prefecture.

In those days, the sake brewing industry was flourishing in Itami in Hyogo Prefecture and Ikeda in Osaka, both famous for the fine sake produced by Tanba brewers. However, after regulations controlling sake production were relaxed, the brewing regions of Nada underwent dramatic growth, and the Tanba grouping extended its activities to the brewing districts there. Due to the diligence of the Tanba brewers and the high-level brewing techniques collectively known as the “Nada-Tanba school” (Nada-Tanba ryū (long “u”)), Nada sake came to show the characteristic improvement during storage (aki-bare) which can be said to be its signature. The presence of the excellent Tanba brewers was one of the contributing factors in the emergence of Nada as a great producing region.

The nation’s first ever sake brewers’ association was formed to improve the techniques of the Tanba brewers, standardize labour conditions, and to generally improve the character of all brewery workers. This union later developed into the Tanba Toji Association (Tanba Toji Kumiai , 丹波杜氏組合), which even now holds annual sake tastings and study sessions, and works to maintain the traditions and skills of Tanba toji. 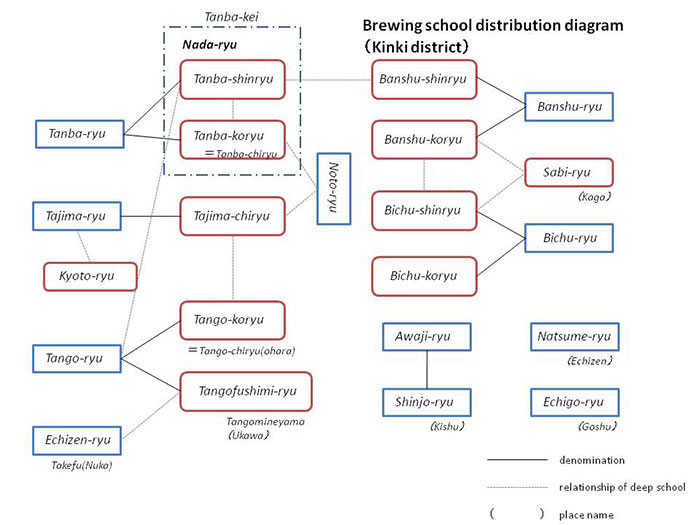