【English】
Kimoto school yeast starter; kimoto (referring to both the starter and the resulting sake made in that style)

Also known as sodate moto, written with a character (育) indicating raising or bringing up. The growth of unwanted micro-organisms is inhibited by the accumulation in the mash of lactic acid produced by lactic acid bacteria.

First, nitrate reducing bacteria multiply in the mash and begin to produce nitrous acid. Next, lactic acid bacteria grow, producing lactic acid. The combined effects of nitrous acid and lactic acid inhibit the growth of yeast, and, in the meantime, the rice is progressively dissolved and saccharified, allowing the accumulation of the nutrients necessary for yeast growth.

As the concentration of lactic acid increases, nitrate reducing bacteria die off, nitrous acid disappears, and the growth of suitable yeast begins. As the rice is saccharified, sugar content increases and the lactic acid bacteria begin to die, finally leaving a mash which has become a high-sugar, high-acidity environment in which only the desired yeast is allowed to grow. Kimoto-kei (kimoto school) is the collective name for the varieties of yeast starter whose production relies on the principle of this complex transition of microflora. Formerly, yeast living in the brewery buildings kura-tsuki kobo, (“on-the-brewery” yeast), grew naturally, but now it is not uncommon to add pure yeast cultures for consistency of brewing. When yeast is added, this should be done after the nitrous acid reaction has disappeared in order to prevent growth inhibition due to nitrous acid. 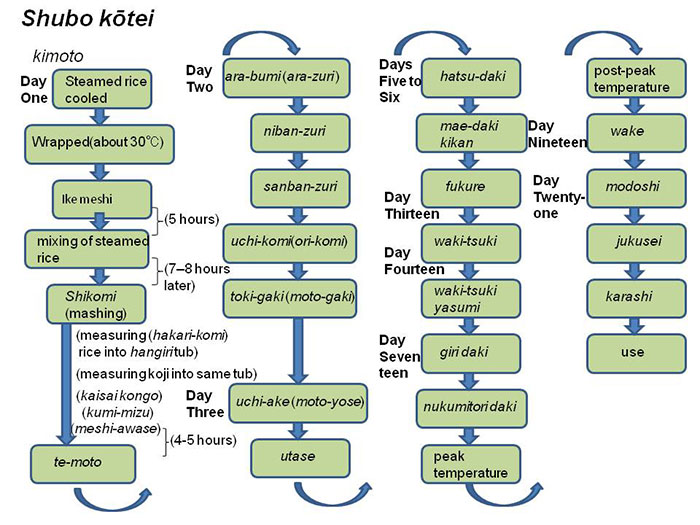 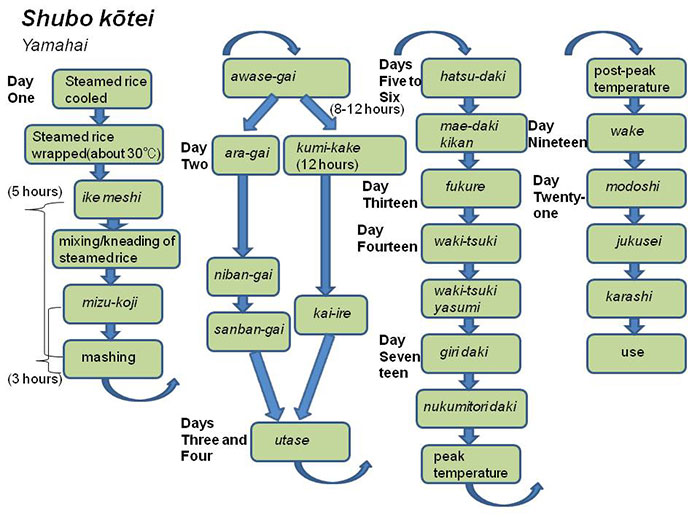