A globe made by threading Japanese cedar (sugi) needles into a basket frame, then trimming the needles evenly to about 40cm in diameter. They used to be displayed under the brewery eaves to tell drinkers that the new sake (shinshu) was ready. The needles are green when the globe is hung up, but gradually turn brown. This change was similar to the maturation of sake, and so came to be used symbolically. As this custom became widespread, it became common for the globes to be displayed all year round like a brewery signboard.

Sake-making tools such as koji futa trays, wooden casks, kai and so on were traditionally preferred to be made with Japanese cedar wood. Timber from Yoshino (in Nara) was of particularly high quality, and that taken from trees from 80-130 years old was low in the resin that could affect quality, and allowed little permeation by and leakage of the sake. Such Yoshino sugi had a pleasant characteristic ki-ga smell, and was an excellent raw material much used to make casks.

Japanese cedar is thus indispensible in sake brewing, and it is the needles of that tree which are used to make sakabayashi. Sacred Japanese cedar are also found in the Omiwa (long “o”) shrine in Nara which is dedicated to the sake god, and it is also for this reason that sakabayashi are often seen at sake breweries even today.

There are some of about 70-80 cm in diameter: these are also known as sugi-dama. 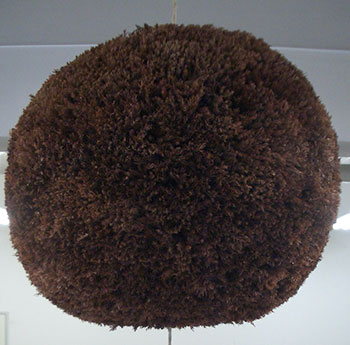