There are four main groups of substances that contribute to colour in seishu. First are pigments derived from flavins, themselves derived from the raw materials for sake. Trace amounts exist in the white rice, but they are mainly produced by yeast and koji -kin.

Second is ferrichrysin, which results from the presence of iron. This gives reddish-brown colour and arises when deferriferrichrysin produced by koji bonds with iron. This pattern differs from other varieties of colouring in that it cannot be easily remedied with active carbon.

Third is the kind of colouring that occurs during storage. This is an ageing-related phenomenon, in part due to colour deriving from melanoidin and the caramelization of sugars created by oxidative polymerization due to the amino-carbonyl reaction of saccharides and nitrogen-containing compounds in the sake. This kind of colouring advances as the period of storage lengthens, though the degree of colouring varies with the character of the specific sake. It is more pronounced in sake with high levels of amino acids, peptides and other nitrogen-containing compounds and that with a high pH and acidity content. Iron, copper and manganese ions are also said to speed up the process.

The fourth kind of colouring is due to sunlight. The effect of light in the range of wavelengths from 320-380nm is particularly extreme, and sake in a clear glass bottle exposed to direct sunlight colours by a factor of 2-5 in around 3 hours. Exposure to sunlight also has an adverse effect on clarity, and causes a characteristic off-smell. In cases where copper is present, it can cause brown discolouration which is visible when reduced, but which vanishes in a state of oxidization. 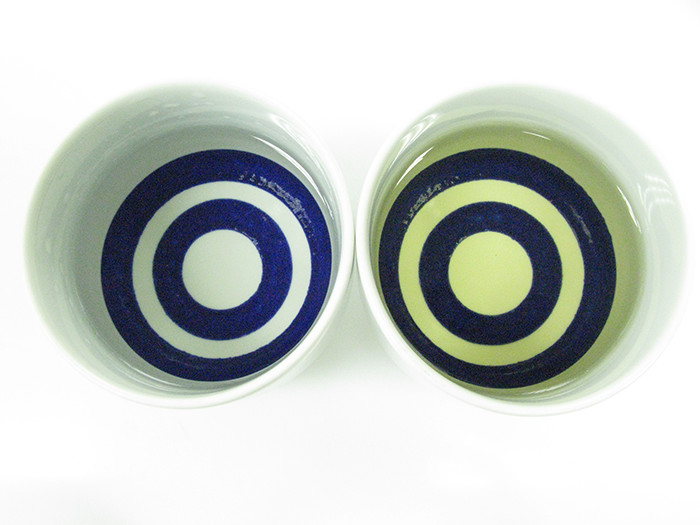