The two characters 倉 and 蔵 are read kura, meaning warehouse. In a sake context, the second also signifies a brewery. Shikomi gura (仕込蔵) means the building actually used for shikomi (mashing) and fermentation; chozo-ko, choshu-ko and choshu-gura all indicate a building for the purpose of storing the finished sake. In traditional breweries, the fermentation room was simply used as the storage space after brewing had finished, so the sake made by each brewery was stored in the same building in which it had been made. Because of increased production levels and extended brewing seasons, most breweries now have warehouses specifically for storage.

Some storage warehouses also contain bottling equipment: others are equipped to be refrigerated to from 10-20°C, or even -5°C for the storage of nama-zake and so on. In some places, large-scale outdoor tanks with equipment to circulate chilled water are used instead of warehouses. 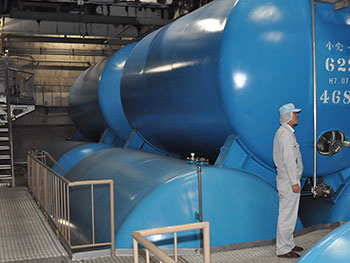