Rice is a member of the Poaceae grass family. The name of its genus, Oryza, comes from a Latin word for rice or rice ear, which was itself derived from a Greek word.   The specific epithet sativa means “cultivated”. The agricultural product of the rice plant (namely the seed) is known as rice, and, with maize and wheat, is one of the world’s three most widely produced grains. The type used as the raw material for seishu is the temperate Japanese variant of the japonica variety (Oryza sativa subsp. japonica).

The kernel is a spikelet on the rachillis branch of the stem of the rice ear, made up of (from the base)：rudimentary glumes；glumes; lemma; palea; rachilla and brown rice. The brown rice is enclosed in the palea and lemma: together these are known as the hull or husk (momi-gara). The brown rice is fixed at the base to the rachilla, but the point of connection is severed at threshing when the palea is removed, and so the rachilla is separated from the husk. There is a germ (embryo) at the base on the side covered by the lemma. The side with the germ is called the ventral side, and the other the dorsal side. 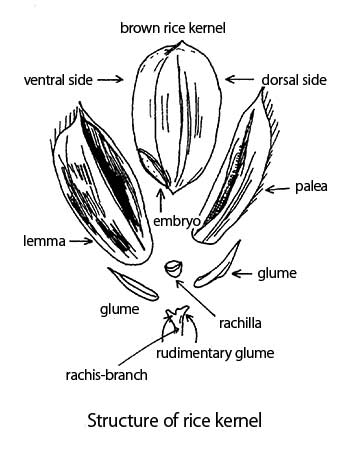