Koji is used in the production of various fermented drinks and foodstuffs, and is made by growing the useful mould koji -kin on rice, barley, soy beans or other grains. In the context of sake brewing, the word koji is generally used to indicate kome-koji (that made with rice).

In order to grow, koji mould produces and various enzymes which it emits from the point of its hyphae. These break down the starch and proteins in steamed rice, barley and so on, and the resulting glucose and amino acids become the energy source for its growth. The production of seishu, miso, vinegars, pickles, soy sauce, shochu and awamori spirit and other fermented foodstuffs utilizes the decompositional action of the various enzymes produced by koji -kin, and the vitamins, aromatics and other products which it generates. These fermentation techniques are unique to eastern Asia, including the Himalayan region and South-east Asia. The kind of koji particular to Japan is known as bara-(loose) koji; that made elsewhere is mostly mochi-koji (in bricks like mochi rice cakes). Mochi-koji is made by crushing raw or heated grains, kneading them into cakes with water, then propagating koji -kin, lactic acid bacteria, Rhizopus mould or other microorganisms. The production of alcoholic beverages in China, Korea, and other East Asian countries besides Japan mainly uses mochi-koji .

Bara–koji is made by growing koji -kin on heated (mainly steamed) grains such as rice and barley. The finished koji retains the form of the original, loose individual kernels, hence the name.

Note: Koji is sometimes translated as “malted rice”. Malting relies on the process of germination, but the white rice used in sake brewing is polished so far that the germ is removed, and so germination is impossible. To use the English word malt in this context is misleading, and belies the central fact that the existence of koji is due to the action of a separate micro-organism. 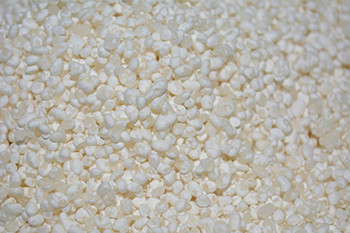 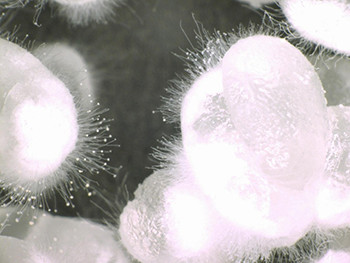