The rice-steaming process is called jo-mai (蒸米), and the term is also applied to the steamed rice itself. An alternative expression for steamed rice is mushi-mai , often abbreviated just to mushi (蒸し). The purpose is the alpha conversion of the starch. In raw rice, starch exists in tight crystals. By cooking or steaming, water and heat work on the crystals, loosening them to make gaps, increasing the stickiness of the rice and improving its flavour. At the same time, the heat denatures proteins and vaporizes lipids, encouraging the growth of koji-kin and the dissolving of rice by enzyme action. The rice is also sterilized.

During steaming, the weight of the white rice increases through water absorption by around 10%. Steaming time is measured from when steam has emerged completely from the top of the layer of rice. Simply for the purpose of the alpha conversion, about 15 minutes would suffice, but it is customary to steam for 40-60 minutes by koshiki, or 20-35 minutes with a rice steaming machine. The purpose of steaming is not solely the alpha conversion of starch, so some think the steaming time should be longer.

The quantity of steam necessary for the traditional koshiki is greater than that for a rice steaming machine. It requires 600 to 800kg of steam to steam 1500kg of rice with a koshiki, whereas only half the amount is plenty in the case of the more efficient continuous steaming apparatus. 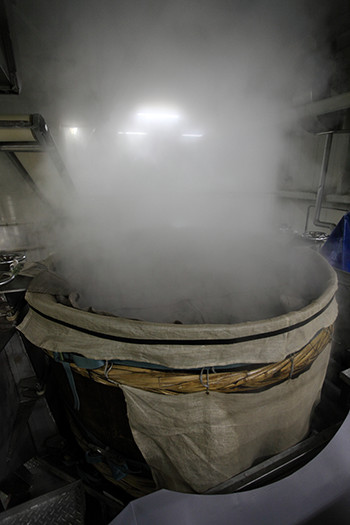