Japan’s most famous sakamai, this strain grew up in tandem with Nada sake to become the finest sake rice of all, and is used by brewers when aiming to make the finest sake. 84% of the entries to the Japan Sake Awards are brewed with Yamada Nishiki as the raw material, of which 82% use that grown in Hyogo Prefecture (2012 figures).

The strain was created in 1923 at the Hyogo Prefectural Agricultural Research Institute by cross-breeding Yamadaho as mother and Tankan Wataribune as father. After being named Yamada Nishiki, it was duly admitted as an officially “recommended” variety in 1936. (Yamada is written with the characters for mountain and rice field, taken from one parent variety. Nishiki means brocade, and implies a treasured object of pride or glory.)

The nearly eighty years of history since have seen numerous attempts at strain improvements, and many new varieties have been developed in other prefectures, but Yamada has never given up its position as king of sake rice varieties. This track record is due of course to its virtues as a strain, but the Association for the Development of Sake Rice made up of prefectural and agricultural groups, along with the Mura-mai Seido (the fruit of long study and direct cooperation between Nada’s brewers and rice farmers), also both made huge contributions.

The area to the north of the Rokko (long “o) mountains is the main growing area. “Heading” (the growth phase prior to flowering) takes place in July, and maturity is reached in October. Long in the stalk, and prone to “lodging” (falling over), high-quality Yamada Nishiki cannot be grown without great agricultural expertise and a geographical location blessed with a large day-and-night temperature differential and clayey soil.

Yamada Nishiki is a large-grained shinpaku-mai, pale in colour with a glossy lustre, its splendid appearance befitting its unchallenged standing. With a low protein content, excellent water absorption and rice solubility, excellent haze penetration into the grain when making koji, there is little cracking during rice polishing and other processes, so handling is exceptionally easy at every stage. This list of its characteristics reads like a definition of ideal rice for sake brewing.

Sake made with Yamada Nishiki has good flavour and aroma, with fine texture and smoothness, with depth and richness of flavour into the bargain. For all these reasons, it is highly prized, not only in Nada, but across the nation. 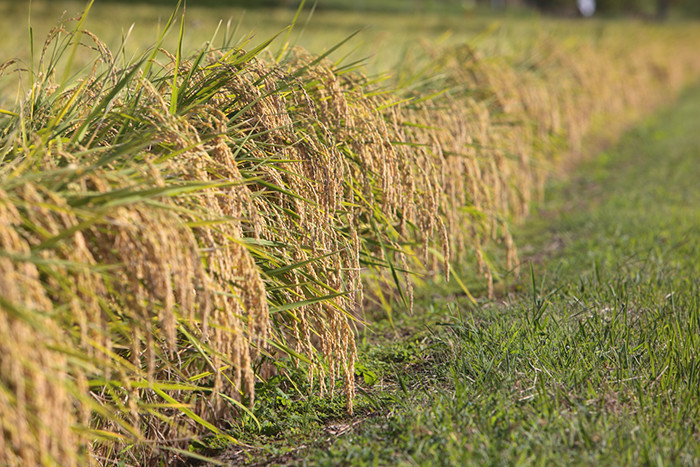