A method of making shubo in which mashing is carried out at 55-58°C with the twin aims of achieving saccharification quickly and efficiently, and also killing off unwanted micro-organisms to grow a pure shubo. It was invented by Nakao Kiyomaro in Hiroshima Prefecture in around 1940. Also known as ama-zake sokujo.

A standard shikomi haigo uses 100kg of steamed rice, 50kg of koji-mai and 270-300l of kumi-mizu. After mashing at 55-58°C, saccharification is carried out by maintaining this temperature for five-to-eight hours, then cooling rapidly to 40°C and adding lactic acid before continuing to cool further. Yeast is added around the 25°C mark, and, after commencing fermentation proper (waki-tsuki) at around 20°C, the remaining processes continue as for ordinary sokujo.

If equipment for saccharification and cooling is adequate,  ko-on toka shubo  makes for ease of mashing and low levels of contamination, with the added advantage of reducing the time needed to make the yeast starter. On the downside, if made with inadequate equipment, or if the reduction of unwanted micro-organisms at the saccharification stage is insufficient, it is common to end up with such problems as starter with low levels of yeast activity, or which weakens easily if the karashi conditioning period before use is too long. 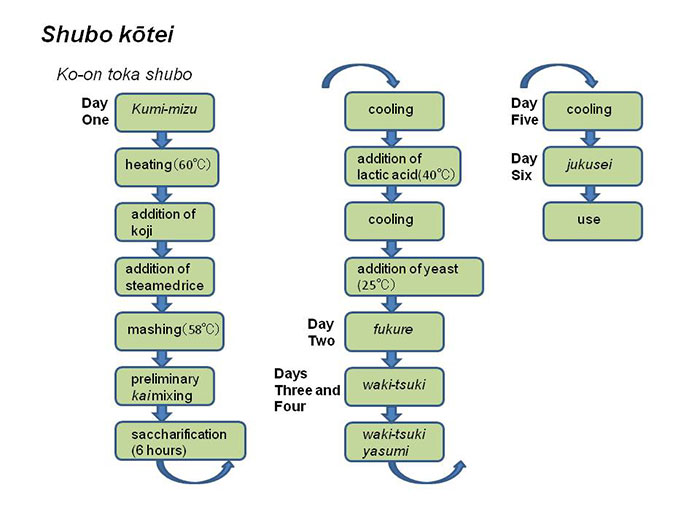