The process of putting hakumai in water after washing to absorb it is called shinseki. The amount of water absorbed during shinseki varies according to the strain, water content and sei-mai buai of the rice, and also the nature and temperature of the water used. For this reason, the rate of absorption is controlled by adjusting the soaking time. 10-15°C is considered a suitable temperature range for steeping. In the case of white rice used for making ginjo-shu, excessive absorption can occur, so steeping time is measured in minutes or even seconds, but steeping normal white rice requires several hours.

Steeping times vary depending on the use to which the rice will be put, so, after washing, it is soaked in separate shinseki tanks, divided by the purpose to which each batch will be put. Stainless conical tanks are now the norm. A variety of tanks exist: some have valves or sluices for discharging rice or water at the bottom, and some can be rotated to tip the rice out. Draining the water from the tank is called mizu-kiri . As water droplets stick to the surface of the rice grains after steeping, it requires a considerable time for them to be removed.

The rate of absorption after soaking is about 25-32% of the original weight of the rice. If the water used for steeping contains iron or manganese metal salts, these will be absorbed by the rice, and leach out during fermentation leading to colouring and deterioration in sake quality, so care must be taken with water quality. 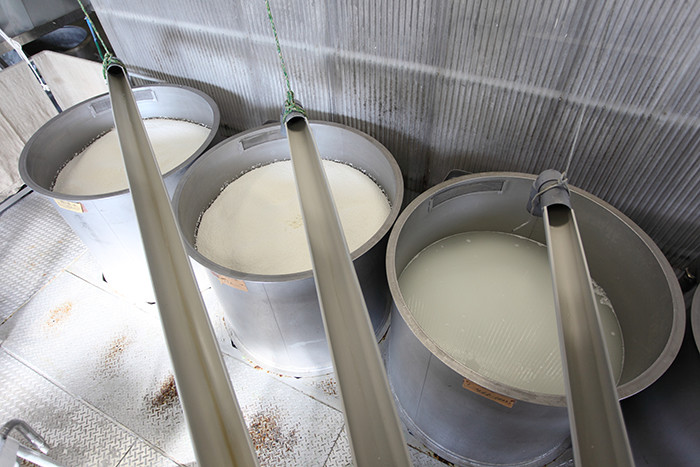