A form of filtration in which moromi is pressed, separating it into sake and sake kasu (pressed sake “cake”). Known as assaku (圧搾, literally compression), or joso (上槽), it should not be confused with the subsequent filtration of the sake itself, which process is called roka (ろ過). Formerly, the mash was poured into long cloth bags called saka-bukuro, which were stacked in a rectangular wooden vat to be pressed. The character (fune (槽)) for this kind of press is the second character of the word joso. (Though properly called joso (上槽), the process of pressing is often colloquially known as shibori (搾り)).

The first sake to emerge is slightly cloudy and this may be put into a separate small tank so that the clear portion can be siphoned off after the sediment (ori) has settled in a few days (a task called ori-biki). This first cloudy portion is given the name arabashiri (荒走り, “rough run”).

From then on, gradually increasing pressure is applied, finally reaching extremely high pressures. The portion following the initial arabashiri is called nakadare (中垂れ, roughly “middle trickle”), and the final portion, which undergoes the highest pressures, is called seme (責め, from the verb for “torment”). The quality of the seme sake is somewhat inferior to nakadare, so it is sometimes kept separate.

After pressing has finished, the compacted cake is removed from the bags or the cloth coverings (rofu, 過布) of machine presses. There are several terms for this task: kasu-hanashi (粕離し, “kasu removal”; kasu-hagi (粕剥き) and kasu-hagashi (粕剥がし), these last both implying the “peeling off” of the caked residue. In the 1960s, the filter (machine) press (assaku-ki) was developed, and it became possible to carry out the entire original process, from loading the mash into bags through to the seme stage, continuously. Now, even the process of kasu-hanashi has been automated.

When it is required to press daiginjo-shu and other high-end sake with as little application of pressure as possible, moromi is poured into cloth saka-bukuro bags, which are then strung up over a tank. This is called fukuro-tsuri (袋吊り, “stringing-up of bags”). It is not possible to press the moromi completely in this way, so it is commonly used in tandem with another method. 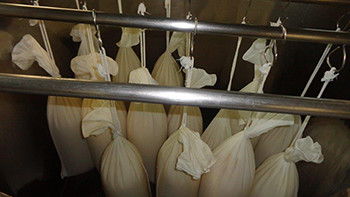 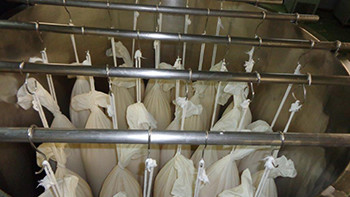 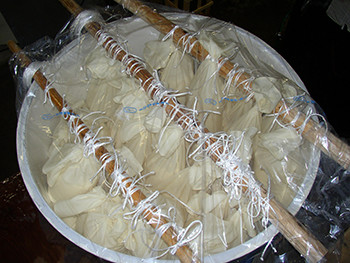