Machinery used to separate moromi into sake and sake kasu by pressing. Until the advent of the modern automatic machine press in the 1960s, hydraulic equipment was commonly used.

The new automatic machines filtered and pressed the moromi as a continuous process、and made the task of removing the caked lees far quicker and easier, so they were quickly widely adopted for their efficiency. Their construction consists of alternating filtration and pressure panels. The latter have rubber or synthetic air bags built in, so the moromi can be completely and evenly pressed. The moromi is first pumped into the machine to be filtered, then compressed air is sent into the air bags and pressing takes place automatically. After pressing is complete, the panels are opened and the caked solids removed.

Hydraulic equipment is set up with a saka-bune between an iron arch, with pressure applied to the centre from above. A “spiral” set-up was common before the time of the hydraulic type of apparatus. A large screw like a jack was set in the position the ram takes in hydraulic systems, and pressure was applied by turning the screw manually. Under this system, pressure was only applied while the screw was being turned, with the disadvantage that pressure decreased when left untended. 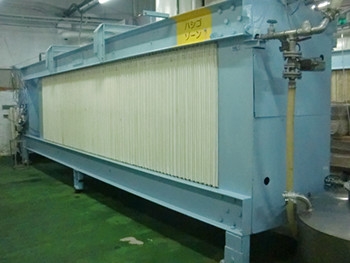