Mature seishu moromi is pressed to separate sake from the remaining solids. The solid portion left is called sake kasu (酒粕) . On average, its weight amounts to about 20-25% of the original  white rice used, though this can exceed 50% in the case of daiginjo.

Comprised of undissolved grains of rice and  kome-koji , yeast, and other constituents of sake, kasu has high nutritional value. Its ingredients can be seen in the chart below. Studies have shown that it has beneficial effects such as decreasing blood pressure and reducing body fat. It can be toasted and eaten, or used to make sweet ama-zake drink or kasu soup (kasu jiru). It is also used to make Japanese pickles (tsukemono), and in the production of go-sei (long “o”) seishu (合成清酒, “synthetic sake”) , shochu (long vowels) spirit and vinegar.

Kasu which has been put in a tank or tub and trampled down to remove air pockets before being sealed for storage is called  fumikomi-gasu (踏込粕) , and is used in pickling and such.

The phenomenon where undissolved rice grains are visible like spots on the back surface of the cake is called  ura-uchi (裏打ち) . Kasu which has ura-uchi looks less attractive, so its commercial value is diminished. That which has black or brown spots on the surface is called “black kasu” (kuro kasu). This is caused by oxydising enzymes produced by  koji -kin , so whether specific kasu is prone to discolour depends on the strain of koji used.

The expression “sake kasu” normally refers to kasu from  seishu  production, but Tax Law specifically refers to it as  seishu-kasu  to avoid confusion with that produced when making other alcoholic beverages. 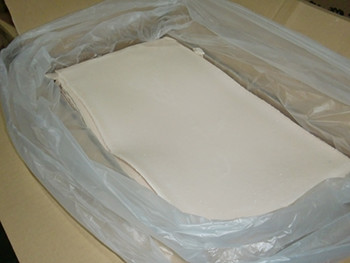