The process of making koji in shallow tray-like boxes (koji buta or simply futa). Until the introduction of  “box” method koji, and machine-made koji, koji for seishu was all made by this method, which is sometimes consequently called the zairai-ho (在来法), “standard (original) method”. In the first half of the koji-making process, koji -mai is laid out on a toko bed, then piled up after undergoing the toko-momi kneading process. In the later stages, the koji is transferred into roughly 1.5kg batches into numerous futa trays, after which point each must be mixed every few hours. (Mixing is called te-ire (手入れ), literally the putting-in of hands.)  This classical system is a labour-intensive system for making koji.

After the mori stage, the trays are stacked on long tana (棚) tables, and the stacks are covered in cloths for insulation. After six to eight hours, when the temperature has reached 34-36℃, the first mixing (naka-shigoto) is carried out. At this stage, the koji is mixed well and piled in the centre of the tray, with an indentation in the centre of the heap. Five to seven hours after the first mixing, the temperature reaches 37-40 degrees, and the final shimai-shigoto mixing takes place. During this task, the koji is mixed thoroughly, reducing the temperature, and is formed into an elliptical mound with raised edges.

When making koji by this “tray” method, it is possible to adjust the flow at the stage of each task according to rice quality and the hard- or softness of the steamed rice. This makes it relatively easy to produce koji of the desired quality. For this reason, the method is often chosen for making ginjo –koji. The actual koji produced by this method is called futa-koji. 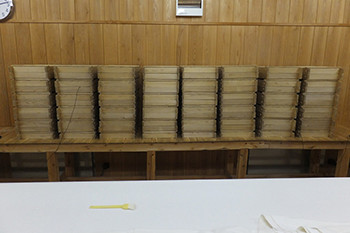 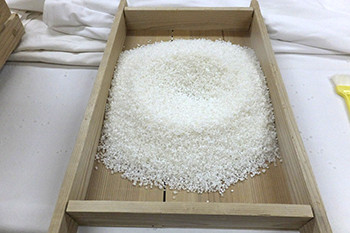 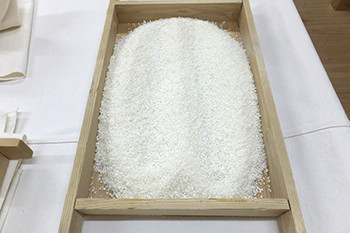