The room in which koji is made is called the koji muro or simply muro, muro meaning a room. Although sake is made primarily in the coldest season, koji-kin grows at high temperatures (30°C-40°C), and requires suitable humidity levels. For this reason, koji making requires a space insulated from the outside air. The following conditions are necessary.

The necessary area depends on the style of production. The process of bringing steamed rice into the culture room or machine is called tori-komi or hiki-komi, and the amount of white rice which can be processed per square metre is 7-8kg for the “tray” method, 10-11kg for the “box” method, and 13-20kg for the simpler kinds of machines. The necessary area can be calculated from the maximum amount of rice to be handled. Because of the nature of the work, koji muro tend to be in the shape of an elongated rectangle, with ceilings about 2-2.2m high.

As in the illustration below, most muro have a rectangular toko bed in the centre, with narrow tana tables on the three walls besides that which houses the doorway. The ceiling has ten-mado (天窓) vents for ventilation purposes.   There are usually one or two sets of two, with sliding closures allowing the flow of air to be adjusted.

The above conditions do not apply when koji making is carried out in a sealed automatic koji apparatus. In this case, the space is not normally called muro but referred to as the koji making chamber, (sei-kiku shitsu), using a different pronunciation of the same character (室).

It is vital to keep this area hygienic with regular cleaning. 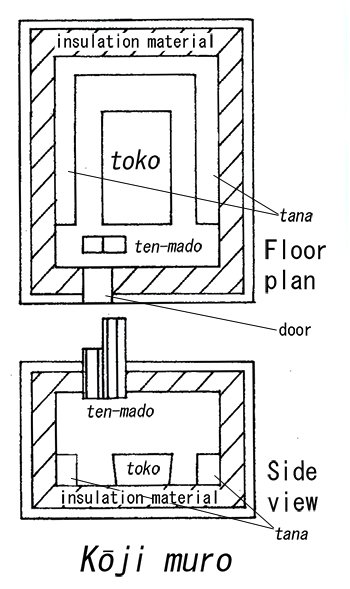